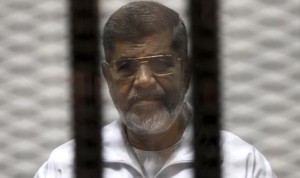 A Cairo criminal court today issued a preliminary death sentence for former president Mohamed Morsi, deposed by the military in 2013 after massive protests against his rule. It’s a preliminary ruling because the court is legally bound to send the case to the grand mufti for consultative review. According to the checks & balances in a kangaroo court, the grand mufti’s opinion is not binding on the court since he’s not a rubber stamp operation & has disagreed with the death sentence in hundreds of cases.

Morsi is already serving a 20-year sentence for ordering the arrest & torture of protesters while in power in 2012. Who could disagree with that verdict? Except that it was handed down by a judiciary which has faithfully served military dictatorship for decades.

Media isn’t particularly good at coherent narrative but there appear to be two cases going on in the courtroom simultaneously–just to make sure we understand the kangaroo character of justice here. One part of this case is called the “Hamas Espionage case” & includes 20 imprisoned defendants, including Morsi & other members of the Muslim Brotherhood (MB), as well as 16 others who fled the country. There’s a litany of charges against them including spying for Hamas, colluding with Hezbollah & Iran’s Revolutionary Guard, & smuggling foreign agents into Egypt to destabilize the country. The court handed down preliminary death sentences to 16 of them but did not include Morsi.

The other case which got Morsi & 100 other defendants the death sentence is his alleged role in the Wadi el-Natrun prison break during the 2011 revolution against Hosni Mubarak. The prison, north of Cairo, was used to jail MB activists, including Morsi, under the regime of Mubarak. An earlier court concluded that Hamas & Hezbollah colluded with the MB to orchestrate a jailbreak. Morsi was among the 20,000 who escaped. The prosecution accused them of vandalizing & setting fire to prison buildings, murder of prison guards, attempted murder, looting prison weapon depots, & releasing prisoners from Hamas, Hezbollah, the MB, assorted “jihadists,” & ordinary criminals. The mind reels before such legal horse manure.

Morsi may or may not face a public hanging since he dutifully served the same masters as the the Mubarak & Sisi juntas. He was no rebel or champion of the oppressed but a violent opponent of the Egyptian uprising. They reduce their options for future minions & useful stooges if they execute him. What these show trials are all about is not getting Mohamed Morsi but targeting the Muslim Brotherhood & destroying every vestige of popular resistance.

It doesn’t matter how reactionary or violent the role of the MB during Morsi’s tenure. When the military junta re-took power in July 2013 & ousted Morsi, they turned on the MB who had exhausted their role in reversing the revolution. The Sisi regime used violent assaults on the MB as a scapegoat to destroy the Egyptian uprising. You can detest the role of the MB but you cannot in justice stand mute while the regime goes after them hammer & tongs, assaulting them, shooting them down, arresting & torturing them, declaring them a terrorist organization. The defense of the MB today is the defense of the Egyptian revolution.

One thing that’s quite evident in this trial is how linked the Palestinian struggle is to the Egyptian revolution. When the kangaroo court made Hamas a centerpiece in the trial it is because solidarity between Palestinians & Egyptians is the very heart of social transformation in the Middle East.

Our fullest solidarity with the MB under attack & our strongest condemnation of this kangaroo travesty.

(Photo of Morsi in the docket from Reuters)