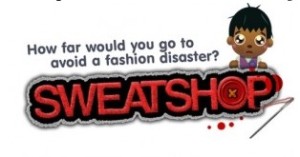 Who needs Charlie Hebdo when you’ve got Forbes? The magazine, which is partially owned by Bono from U2, has an entire stable of trained seals who bark on cue in defense of sweatshops & child labor & against the BDS movement, accusing it of bullying celebrities.

In researching something in Forbes, I happened across the 2012 review of an iPad game available at the app store. It appeared to be sarcasm, which was surprising from the dull minds over at Forbes, but it’s indistinguishable from the sweatshop paeans written by Nicholas Kristof, Paul Krugman, & Jeffrey Sachs, so maybe not.

The game is named Sweatshop & the gamer is put in the role of a sweatshop owner “in an unnamed poor country, making bags, trainers, & other fripperies for relatively rich westerners.”

One game figure is Boy “representing the workers, & making communistic demands for water breaks, toilets & the like” & another is Boss “representing the urge to wring every possible cent of profit from every worker” & who advocated the torture of employees “for the fun of it.”

There are different kinds of workers represented in the game–from children, “who are slow but cheap” to robots which are faster & more efficient than humans but “also bleed less after industrial accidents.”

Don’t be too sure it’s sarcasm. We know from when the owner Steve Forbes ran for president in 1996 & 2000 that he’s a complete dunce & dour to boot–a classic case of privilege makes you stupid. The bon mot is not one of his gifts. The verbal blunder is more his style. Wit is beyond his grasp–unless you count putting your foot in your mouth.

Overall, the reviewer said Sweatshop was a fun game which didn’t “wear its message too heavily.” One doesn’t know whether to be creeped out or just aghast at the cynicism. Or both.

(Photo is cover of Sweatshop)