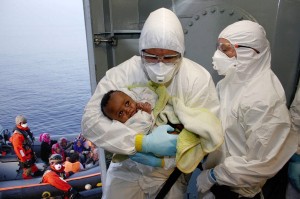 This infant was rescued with his/her mother in the Mediterranean by a German frigate. (There was no explanation for why a German warship was in the Mediterranean.) Originally, I was going to do a post on the tens of thousands of unaccompanied children immigrants on every international route; on the thousands of children in US foster care because of massive deportations under the Obama regime; of the wrenching trauma for children left behind when parents leave for work.

The frightened little face of this baby renders words unnecessary & shows up the barbarism of neoliberal immigration policy.

May he/she have a blessed life.

Immigration is a human right! Open the borders to every man, woman, & child. No human being is illegal.