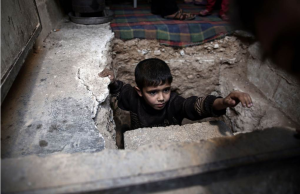 A Syrian man named Abu Omar who lives in the rebel-held town of Douma (on the outskirts of Damascus) dug an underground shelter with the help of his neighbor to protect his family from Syrian & Russian bombing. It took them two weeks to build to build a single room with an air vent.

It’s not reported whether this little boy climbing out of the shelter is Abu Omar’s son or a neighbor child.