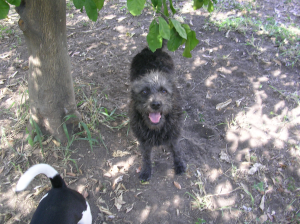 The caption to this photo is “Are you smarter than a Schnauzer?” This is Sophie-Amalia who was rescued by a friend off the street & brought to me. She’s three times the size of my other rescues & several times smarter than me.

I’ve given up on keeping her in the yard after months of barricading every inch of the fence & with the neighbor reinforcing his side. He doesn’t like dogs & has taken a particular antipathy to Sophie who trespasses through his yard to get to the street. If he had a slingshot, she’d be toast.

When I go looking for her, she takes that as a signal to run like hell the other direction. This morning, it took me an hour & a-half to chase her through the allies & streets as she barked at dogs, chased cats & chickens, hid from me in crawl spaces under houses.
I try to be foxy with her & twiddle my thumbs looking in the other direction to see if she’ll try to escape & I can plug up the weak spot in the fence. (She can’t stay long in the house because she menaces & scares my birds.) But she’s smart enough to go to college & waits me out. As soon as I go in the house, she’s off & running. She usually hangs around outside the yard but I can never trust she won’t go too far.

No one knows better than me that I’m being played for a fool by my Schnauzer. She needs an energetic caretaker who will understand she’s a free spirit–by which I mean, she won’t tolerate a leash. (I can rescue them; I can’t train them.) She’s up for adoption but her high energy scared the hell out of the family that recently came to check her out. She makes me so damn mad but she is also the sweetest, most affectionate little barker you’ll ever meet & loves to be held like a baby.

She’s spayed, up-to-date on her shots, & has a clean bill of health from the vet.