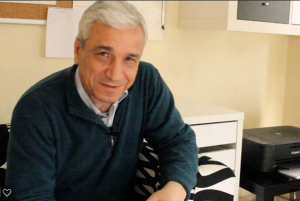 In contrast to the shabby theoretics & apologetics of Assad supporters–many of whom are westerners–there are the voices of experienced Syrian political activists, of those who know the autocratic character of the Assad regime, understand the complexities of Syrian society & politics, have experienced its gulag, & fight to transform Syrian society.

The depth & character of their analyses make short shrift of the rubbish pumped out by Global Research & other conspiracy asylums. This essay titled “Syria, Iran, ISIS & the Future of Social Justice” by Yassin al-Haj Saleh, now in exile in Turkey, was written in May 2015, before Russia entered the war in September to rescue the weakening Assad counterrevolution against the popular movement.

He does not present the simple-minded view of Assad supporters that Assad, Russia, & Iran are fighting US-backed “jihadists” in a regime-change operation–or what he calls “the reductionist image of modernist Assad versus terrorist fundamentalists”–& he certainly doesn’t use the language of Muslim-hating US war propaganda. But he is able to elaborate (without the caricatures of Assad supporters) the emergence of fundamentalism & its role in Syrian politics.

It we want to understand the war in Syria we are advised to study Syrian revolutionists & not use Russian or Iranian media or, heaven forbid, Global Research as political scripture.