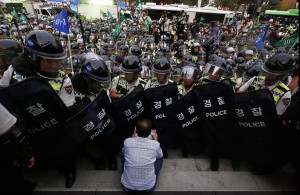 The caption to this AP photo said: “A South Korean protester surrounded by police sits on steps during a rally against the Government’s labor policy.” When a single protester is surrounded by riot cops as far as the eye can see, wouldn’t you think an elaboration would be required? Like why is he casually reading the sports page when they’re breathing down his neck with truncheons in hand?

If you look in the background of the photo, you can see there are other protesters at this rally in Seoul. In fact, for the past six months tens of thousands of union workers across South Korea have protested against government attacks on labor rights by modifying laws cutting pensions & to make it easier to fire people. Protesters are also demanding an increase in the minimum hourly wage from 5,580 won (US $5.18) to 10,000 won ($9.10).

The proposed pension cutbacks would affect government workers as well as workers in the chaebol which are business conglomerates unique to South Korea. Chaebol were formed in the 1960s under the military dictatorship of Park Chung-hee who was an ally of the US. They are immense monopolies owned, controlled, & managed by family dynasties which are integral to the functioning of the government & to the massive repression of worker’s rights. In most countries the ruling elite hide behind minions who run their corporations but in South Korea oligarchic rule is quite direct. Samsung, Hyundai, & LG Group are among the biggest & most important chaebol.

Chaebol under the military dictatorship were attributed with transforming the South Korean economy from agrarian to industrial & to an export economy–& we can be certain there was plenty of coercion involved. Chaebols in many ways pioneered neoliberal corporate strategies, including sweatshops & export-oriented markets.

Economic indices seem to bear out government claims that South Korea’s standard of living required repressive labor practices but that’s only if sweatshops are considered a measure of economic well-being. In the early 1970s, when clothing retailers started moving operations overseas for cheaper labor, South Korea was the first country they moved to. South Korea now has free trade (i.e., sweatshop) agreements with the US, European Union, Canada, Australia, China.

There have also been repeated farmer protests in South Korea over export of their produce & the flooding of South Korean markets with US agricultural products.

A more telling index of economic well-being for working people is the over a million homeless people just in Seoul & reportedly islands where the disabled, unemployed, & homeless are forced to work as slaves. Another telling index is that South Korean unions, long-compromised with the autocratic regime, feel compelled to mobilize their ranks against the latest assaults on workers’ rights.

Our fullest solidarity with the working people of South Korea. May they kick ass!