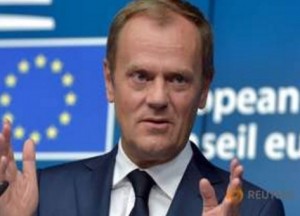 Behold the ugly, stupid man with the morals of a rabid Rottweiler. There’s far too many of them running the world.

This one is EU Council President Donald Tusk (rhymes with Donald Drumpf) who warned refugees–who he called “illegal economic migrants”–not to come to Europe “for nothing.”

In a news conference during his tour of Greece & the Balkan states, he said his mission is the “total elimination” of the sea transit of refugees from Turkey to Greece. That’s why there are thousands of refugees on the Syrian-Turkish border unable to cross & 30,000 refugees stranded in Greece unable to move north. The Macedonian border which allowed in a few hundred Syrians & Iraqis per day now is only allowing a handful to pass through. Afghans who are fleeing a war zone are denied asylum.

The purpose of Tusk’s tour is to get agreement among the Balkan states for how to deal with refugees–that is, how to most effectively keep them out–because he fears the crisis could tear the EU apart. Others who are not ugly, stupid men with rabid morals think the demolition of the EU isn’t coming fast enough.

Use his ugly, stupid, rabid face to practice your horse manure shot.