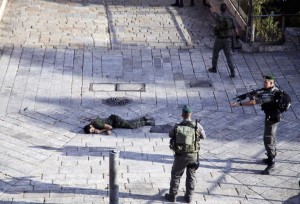 Apologies for the gruesome photo of this incident when a young Palestinian man was executed by Israeli “police” (in full military gear) after allegedly attempting to stab a “paramilitary policeman” at the entrance to the Old City in occupied East Jerusalem.
*****************

It’s seems like a masterstroke of Israeli propaganda that British writer JK Rowling has signed on with Culture For Coexistence (CFC), a newly-formed group in the UK who just issued a letter opposing BDS for “singling out Israel” in a “divisive & discriminatory” way & ‘delegitimizing’ Israel. They propose “peaceful coexistence” between Israelis & Palestinians to promote a two-state solution.

That song & dance must have appealed to Rowling who is renowned for a charitable heart if not for the cogency of her politics. But even the Guardian-UK which is publishing CFC appeals had to fess up that most of the 150 signatories on the letter were well-known figures in Zionist circles in the UK & not disinterested human rights advocates. Several of the signers are associated with Conservative Friends of Israel & Labour Friends of Israel. A little vetting of the other signers would turn up a whole raft of such associations.

What the Guardian didn’t mention is that the organizer of the initiative is Neil Blair who is Rowling’s literary agent. He is also director of her digital Harry Potter project (Pottermore) which stands to make her a bundle; director of her East European children’s charity (Lumos)–& most apropos, a key figure in Friends of the Abraham Fund Initiative, a Zionist front group that markets itself as advocates for peaceful coexistence between Israeli Jews & Israeli “Arabs” & at no time refers to Israeli Palestinians. Abraham Fund sponsors include Israeli corporations, the US State Department, & many Zionist organizations. It is of interest to many that Working Assets/CREDO Fund, the cell phone company pitching itself as progressive, is a sponsor.

Culture For Coexistence (CFC) is like the Hollywood group called Creative Community for Peace (CCFP) formed in 2011 as a pro-Israel, anti-BDS group of music executives, agents, performers. Both groups have the same politics. CCFP played a public role during the Israeli carpet bombing siege of Gaza in 2014 by pushing their propaganda in trade journals. The talents of both CFC & CCFP are in their promotional skills, access to media, & ability to bully or sweet-talk high profile celebrities into signing on to oppose BDS & render legitimacy to Israel. Their weakness is that they’re peddling rubbish & lies.

This gruesome photo exposes Israel’s real vision of peaceful coexistence: one of the best armed militaries in the world against unarmed Palestinians–including summary execution. Israel will bury this young man in secret & deny his family burial rights.

We call out that peaceful coexistence crap for what it is: a call for Palestinians to surrender to apartheid & ethnic cleansing & to accept extermination. Our response is that if it takes such deceits & intrigues to counter BDS, then it must be effective & we redouble our efforts to build it.

We honor this man as a freedom fighter who would not accept apartheid & colonialism. May he RIP.