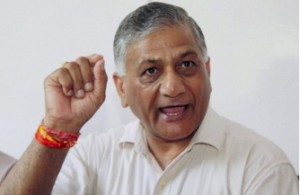 What kind of lowlife guy would say “If someone throws stones at a dog, the government is not responsible” when asked about the torching murder of two small children, as Indian politician General VK Singh did? Racist & supremacist ideas certainly but there’s a whole lot of things in his unsavory biography that would explain his loathsome mentality.

Singh was trained in the 1970s as a US Army ranger for counterinsurgency commando operations (psycho stuff) & most of his military career was spent in special forces roles. He rose to the rank of 4-star general in the Indian army & was army chief of staff from 2010 to 2012.

So there you have it! The making of a psycho. And there it becomes clear that militarism is all of a piece–from the US to Israel to India to Myanmar to Russia.

Nothing is more imperative than to rebuild the international antiwar movement. Make these psychos ancient history.

(Photo is VK Singh by PTI)