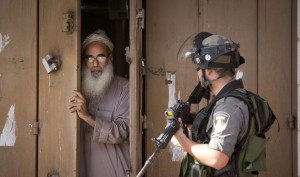 The caption to this photo read: “A Palestinian man closes his shop during clashes between Israeli troops & Palestinian protesters in the West Bank town of al-Ram, north of Jerusalem. Ten Israelis have been killed over the last month, mainly in stabbing attacks. On the Palestinian side, 48 people have been killed.” So let’s fill in the blanks in a narrative where the omissions matter more than what is said. You’re not writing a book when you caption a photo but you ought to include the relevant.

Al-Ram is a Palestinian town adjacent to East Jerusalem & located between Jerusalem & Ramallah, now under Israeli military occupation along with East Jerusalem, the West Bank, & Gaza since the 1967 war. During the occupation, Israel has confiscated Palestinian lands to construct illegal housing settlements, three military bases which surround the town, an industrial zone, military checkpoints, Israeli bypass roads, & the apartheid wall.

The apartheid wall splits Al-Ram, isolating residents from neighboring Palestinian towns & from Jerusalem city. All shops that were once on the main road now front a 10-meter high segregation wall with no access to either Jerusalem or Ramallah except through a backroad.

No attempts are made in media to explain the immense disparity in fatalities between Israelis allegedly stabbed & Palestinians shot by Israeli soldiers. That thing about half the Palestinian fatalities being knife assailants is wearing out its credibility. But Palestinians have a right to demand forensic verification of the charges; & they have a right to demand the bodies of their loved ones be returned to them for respectful burial. Israel’s so called “terrorists” are Palestinian freedom fighters.

To support Palestinians, build the hell out of BDS, the economic, cultural, & academic boycott of Israel & continue protest rallies demanding no aid of any kind of apartheid Israel, stop the violence, end the occupation.