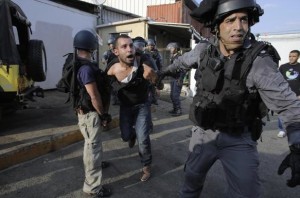 There have been some Israeli soldiers killed in the murderous assault on Gaza & at last media can show Israelis grieving & not just cheering ethnic cleansing. There are hundreds of photos of Palestinians sobbing as they collect the remains of their beloved or as they bury them. One of the more wrenching was captioned “Relatives of Palestinian Islamic Jihad militant Abduallah El-Buhasi, who medics said was killed in an Israeli air strike, mourn during his funeral” in Gaza. The suggestion is of course, he was a terrorist & maybe he was hit by an evil fairy flying in from outer space. Today Reuters news service chose a woman grieving at the funeral of her Israeli military brother as their photo of the day. May he RIP but his funeral is being used for war propaganda.

This is our choice for photo of the day: despite the blood bath in Gaza & the terrorism of Israeli military in the West Bank, intifada will not be defeated. This young Palestinian in Nazareth, Israel–the very heart of the beast–is being arrested because he threw stones. Israel claims affinity with David in the myth of David & Goliath. In truth their affinity is with the Gestapo in the Third Reich.

Intifada will not be defeated as long as we render the most active & consistent support rallying to demand “Stop the massacre in Gaza.” Join the economic boycott of all Israeli goods (barcode beginning 729) & support the cultural boycott of Israel.