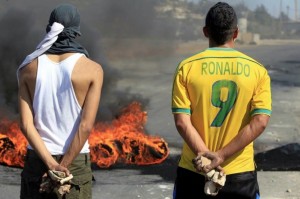 And while Gaza grieves & flees from ethnic cleansing, Palestinian intifada defies the jackboot occupation of the West Bank to rally in defense of Gaza. These young men stand with rocks & block the road with burning tires against one of the most barbaric military forces in the world. They rally outside Ofer prison near Ramallah where Israel warehouses hundreds of Palestinian activists who will not bend the knee to Israeli apartheid.

Israel cleared Zionist settlers out of Gaza in 2005 ostensibly to generate peace but it is now eminently clear it was to isolate & exterminate the Palestinians of Gaza. These young men would face the same fate as Gaza if Israel weren’t concerned about damaging Zionist settlements in the West Bank.

The international solidarity movement is now an essential part of Palestinian intifada & must carry the banner for those now fighting for their lives. For those who cannot join the hundreds of solidarity rallies around this world to demand “Stop the massacre in Gaza”, you can participate by honoring & promoting the economic boycott of all Israeli goods (barcode beginning 729) & supporting & building the cultural boycott of Israel.