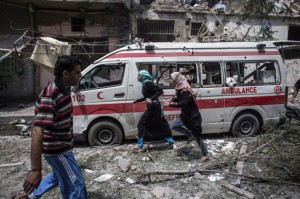 This is another photo worth a thousand lies exposing egregious war crimes by the Israeli military. These Palestinians–“civilians,” if you will–run past a bombed out ambulance during a brief ceasefire requested by rescue operations to retrieve the bodies of wounded & dead in Gaza City (July 20th). Retrieving victims means trying to dislodge many from the rubble of bombed buildings or picking up their mangled remains off the streets so a time limit constitutes a war crime.

Israel gets around indictment for war crimes by claiming Palestinians misuse medical services & ambulances for terrorist activities–which is why they are bombing ambulances & hospitals in Gaza. “He who believeth Israeli propaganda has to have their head examined,” saith the Lord.

Israel has been spewing this trash for decades & in 2004 the Israeli Minister of Foreign Affairs (the hasbara department of the state of Israel) issued a statement which included this apologetic for genocide: “One of the issues that most hampers the IDF in its fight against terror is the intentional blurring of distinctions between Palestinian terrorist groups & the innocent Palestinian population. Terror groups operate from within residential centers, in civilian dress, assimilating in the local population & taking refuge in public institutions. Terrorists exploit civic buildings, hospitals & ambulances, religious institutions & schools as covers for their activities.”

So there you have it! Israel can bomb everything in sight because Palestinians hide rocket launchers & smuggling tunnels in hospitals & ambulances & every Palestinian is a suspect terrorist. International law obligates the Israeli military to allow medical teams to operate during times of conflict. So why aren’t the UN & Human Rights Watch (HRW) screaming bloody murder? Because both are up to their eyeballs running interference for Israeli genocide & scurrying around like the rats they are to see or hear no evil.

The political & criminal affinity between Israel & the US is no where more evident than in military assaults on hospitals & ambulances. It became public in 2004 that the US used the same military tactic in Iraq, most notably in Fullajah, where they restricted civilian health care services, seized & bombed clinics & hospitals, & confiscated ambulances. The Pentagon claimed US soldiers fired on ambulances routinely because they were involved in carrying insurgents or arms.

The bombing of al-Aqsa Hospital in central Gaza yesterday took out several operating rooms, vital medical equipment including x-ray facilities, & maternity wards & has left the hospital unable to receive the hundreds of seriously injured. Ambulances trying to move patients to another hospital were hit by Israeli airstrikes.

It appears Israel is riding high because the death & destruction in Gaza is so massive. But this monstrous genocidal overkill is decisively demolishing the narrative of Israel defending itself against barrages of Hamas rockets. Israel & the US can kiss those hasbara lies good-bye cause they no longer fly. Intifada is now international.

All out in protest against Israeli genocide! No military aid to Israel! Stop the massacre in Gaza!