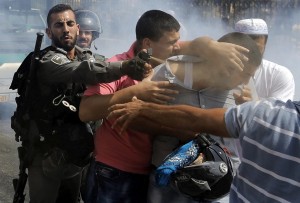 This Israeli cop is using pepper spray on a Palestinian activist defending Al-Aqsa mosque. It should be noted that when a campus cop at the University of California (UC) pulled this on students during the Occupy movement in 2011, photos & videos of the incident went viral because it is so egregious & gratuitous in aggression. One of the UC students sprayed that day said the pain is like “thousands of pieces of glass shooting into your eyes.” There are also deleterious health affects from pepper spray, especially for those with respiratory problems.

The way the Guardian-UK tempered outrage at this image was by another of their political non sequiturs in the caption which said this incident happened “following the deadly shooting of an Israeli couple in the occupied West Bank.” What does this guy several miles away in Jerusalem have to do with that incident? Is this an admission that Israeli police engage in revenge violence?

When you look at the report of that West Bank shooting, you learn first of all that they don’t know who the assailants in the incident are; they only allege a Palestinian, without a shred of evidence. It could just as well be another Israeli settler in a dispute over dividing up stolen Palestinian property or an Israeli soldier who flipped his cork. But if it was a Palestinian, there are plenty of motives since there are hundreds of incidents every day of settler aggression against Palestinians: the torching of Palestinian homes & mosques; assaults on Palestinians defending their lands; incarceration of Palestinian protesters, including kids; the destruction of water wells & olive trees; & Israeli government demolitions of thousands of Palestinian homes leaving hundreds of families homeless.

To justify calls by extremist Israelis to visit Al-Aqsa to worship & vandalize & to support police assaults, the Guardian tells us “In ancient times, Jews made pilgrimages to Jerusalem on Sukkot,” a Jewish holiday. ‘In ancient times’, some people’s ancestors prayed to tree stumps in the Black Forest but that doesn’t give them claim to take back the forest. Now that Sukkot has ended, we should see the end of Israeli violence at Al-Aqsa–but of course we won’t. Israel will just come up with another Jewish holiday or pretext to harass Palestinian worshippers in the ongoing campaign to destroy the mosque & replace it with a temple.