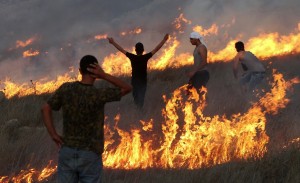 The fatal shooting of an Israeli settler couple in the West Bank (last Thursday) has unleashed an alarming maelstrom of settler & military violence against Palestinians–even though Israeli authorities don’t know who committed the crime. If people recall, the carpet bombing siege of Gaza in 2014 was initially justified by the kidnapping of three settler teens in the West Bank. Israel immediately attributed the crime to Hamas when we later learned they knew that to be false.

When we look at the provocations at Al-Aqsa mosque in conjunction with the pogrom launched against Palestinians in the West Bank, we might conclude Israel is deliberately provoking Palestinians so they are accused of perpetrating violence when they defend themselves against it.

Settler & military violence against Palestinians & their property is routine in the West Bank. According to the UN, the Israeli army has injured 1,740 & killed 26 Palestinians this year in 151 reported attacks. But as a result of the killings, hundreds of settlers are now rioting, entering Palestinian villages, beating Palestinians, attacking homes & vehicles, including an ambulance, torching things & spray painting graffiti–all under the protection of soldiers. The army has deployed four extra battalions, ostensibly to raid villages on a manhunt for the gunmen. Ten Palestinians have been injured by live Israeli fire.

The Guardian-UK caption to this photo said Palestinian protesters “stand among fires during clashes with Israeli settlers in the village of Burin” without identifying who set the fires. It’s highly unlikely Palestinians are torching their own villages but if the Guardian acknowledges Israeli settlers are doing this, that would expose to the world the nature of Israeli settlements & occupation in the West Bank.

This is a call to arms & for emergency rallies in defense of Palestinians. In the US, the Council on American-Islamic Relations (CAIR) has issued an alert to Muslim civil rights organizations & mosques that hate rallies are planned in 20 US locations on October 9th & 10th, possibly by armed anti-Muslim extremists targeting mosques.

If pogroms in the West Bank & hate rallies in the US & elsewhere are not met with a powerful political response, they will crescendo out of control. Solidarity activists around the world should immediately consider rallies combining support for Palestinians & for Muslims.