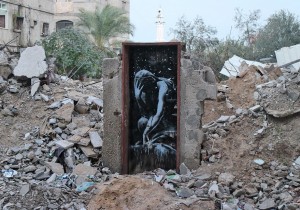 One doesn’t know whether to laud or scratch one’s head over Banksy in Gaza. Banksy is the pseudonym for an English artist who does satirical & political graffiti & who just released a short video & created works in the wreckage of Gaza. It’s a curious melange of graffiti including this portrayal of overwhelming grief & also a giant kitten. It seemed the kitten was to delight the traumatized children of Gaza but when asked about it, Banksy replied with not just a hint of misanthropy: “A local man came up & said ‘Please — what does this mean?’ I explained I wanted to highlight the destruction in Gaza by posting photos on my website — but on the internet people only look at pictures of kittens.”

Even for those who love satire, the video seems more light-hearted & less dark-humored than it ought to be when thousands are still homeless & children are dying from hypothermia in the freezing cold. And yet on his website he writes: “Gaza is often described as ‘the world’s largest open air prison’ because no-one is allowed to enter or leave. But that seems a bit unfair to prisons — they don’t have their electricity & drinking water cut off randomly almost every day.”

But the most curious part of all this, indeed a troubling part, is the statement Banksy released to the NY Times: “I don’t want to take sides. But when you see entire suburban neighborhoods reduced to rubble with no hope of a future — what you’re really looking at is a vast outdoor recruitment center for terrorists. And we should probably address this for all our sakes.”

Banksy doesn’t want to take sides in a genocide!? Gaza is breeding terrorists!? Standing with Gaza against Israeli ethnic cleansing is to prevent the terrorists produced in Gaza from coming after us!?

This is Banksy’s website & video so you can judge for yourself. Next time he might want to leave the graffiti & get out of town without opening his trap: http://banksy.co.uk/