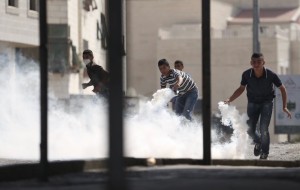 These are Palestinian activists in the West Bank town of Al-Ram near Jerusalem protesting the police & military violence against Palestinian worshippers at the al-Aqsa mosque compound. The young men are returning tear gas canisters fired at them by Israeli troops. The caption to the photo is another classic instance of media not always outright lying about the Palestinian struggle (though they do that often enough) but never telling the truth.

After saying why these fellows are protesting, the caption described events at al-Aqsa: “Israeli police armed with stun grenades & tear gas clashed with rock-throwing Palestinian youths who barricaded themselves inside Jerusalem’s al-Aqsa mosque on Tuesday, police & witnesses said, in the third day of violence at the sacred site. Masked Palestinians hurled flares at the security forces, who said they were trying to secure the plaza outside Islam’s third holiest shrine to stop what they said was a Palestinian attempt to disrupt visits to the compound on Jewish New Year.”

Incoherent narrative about Israeli aggression doesn’t just mean media can’t put a sentence together or they can’t figure out what the hell’s going on–though there is that–but by using obfuscation they want the conflict to seem intractable, impervious to resolution, ancient in origin. And above all, they want Palestinians to appear irascible & violent disciples of Hamas.

‘Masked Palestinian youths’ barricaded themselves & hurled flares to disrupt a Jewish holiday. How unreasonable can Palestinians be to defend their mosque against aggressive Zionist extremists who have no Judaic reason to visit a mosque on a Jewish holiday. Why aren’t such religious guys at a synagogue praying up a storm? Or at the Wailing Wall outside the al-Aqsa compound? Why are they hanging out at the mosque forcing its closure to Palestinian worshippers if it isn’t as provocation?

Who knows what in the hell happened there when media won’t tell the truth, Palestinian reporters are arrested, & media sources are the Israeli police themselves? But we don’t need to know the details to choose sides because Jewish worshippers & Israeli police have no reason to be at the mosque or within the confines of the Noble Sanctuary compound & are violating about a dozen international laws as well as the mosque charter between Jordan & Israel barring Christians & Jews from worshipping there.