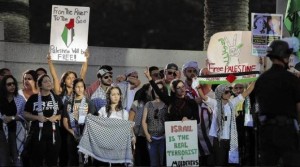 Israel & the Alibi Ikes of media have been pawning off rubbish as truth for so long they almost got caught unawares by the boycott movement & the massive growth of Palestinian solidarity. But Zionism has a lot of money at its disposal to catch up & there’s evidence of that everywhere: they have taken over the Israel-Palestine narrative on Wikipedia; are targeting student boycott (BDS) groups; Zionist-sponsored speakers tour campuses denouncing “honor killings” under the guise of feminism & human rights to discredit Middle Eastern cultures as irredemiably violent; they’re even trying to bring back pro-Israel rallies. Above all, they work tirelessly to equate anti-Zionism with antisemitism. And of course, in all this the media plays the indispensable role.

Palestinians have enough to do defending themselves against Israeli settlements, land expropriations, the military occupation & jackboot tyranny in the West Bank, incarcerations, including of their children, the unspeakable blockade of Gaza, & the ethnic cleansing assault going on now. It is the Palestinian solidarity movement around the world that must take up the propaganda flank of this struggle & work as tirelessly to get the truth out as hasbara agents work to dispense lies.

Irish activists are circulating a petition to get their news network to give honest coverage in place of hasbara lies; English activists are protesting at the BBC because of its wretched history of lies. These actions matter because even if they don’t compel news networks to stop covering for Israeli ethnic cleansing, many will see there is another side to the story. Each media source doesn’t have to be specifically targeted because they’re all complicit & massive protests with placards demanding “stop the massacre in Gaza” will put the lie to all of them.

In the 1970s, when Palestinian justice didn’t appear to have a snow ball’s chance in hell, political relations between liberal Zionists (those who want a bantustate solution rather than a democratic secular state) & Palestinian supporters were almost amicable but as BDS gains ground around the world, amity morphs into rancor & incompatibilities between justice & apartheid become crystal clear.

Every year since 1964, Israel has sponsored a Celebrate Israel Parade in NYC where Zionists from around the country (& probably fleets from Israel) march up Fifth Avenue to salute Israel. It’s a spectacle of hasbara & organizers claim it attracts thousands; last year they claim it drew a million. A few years ago, they initiated the same parades in London & Manchester, England. But there hasn’t been a Zionist popular movement in the streets because media was all wrapped up & there wasn’t much need for a social movement to counter the lies.

BDS is changing that & we can expect to see Zionist rallies around the world, especially as counter-protests to Palestinian support rallies. Last Sunday, Zionist protesters gathered for a pro-Israel rally in Los Angeles, apparently as a counter-protest to a Palestinian solidarity rally across the street. One account estimated Palestinian supporters at 200 & different media estimated the Zionist group from 500 to 1,800. Media reports are completely conflicted & quite frankly questionable; the most honest appears to be in The Jewish Press. Photos show the Zionists flipping the bird to pro-Palestinian protesters & there was of course mutual taunting involved. It isn’t the most gracious way of operating but it isn’t fisticuffs either. What appears to be an entirely minor scuffle between protesters–provoked by a Zionist when he grabbed a Palestinian flag & stomped on it–became national news when a federal officer shot at the Palestinians driving away after the altercation where no one was hurt.

A spokeswoman for the Israeli-American Council, which co-organized the rally, characterized it as very peaceful & described the altercation as a minor incident (probably so nobody in her group would get arrested) but cops arrested the four Palestinians & booked them for assault with a deadly weapon. We’re talking the stick holding the flag, which multiplied into several sticks in media accounts.

That axiom about “the truth will set you free” is a cliché & quite frankly tedious as all get-out but in fact, truth & strength in numbers are the only weapons we have & when we combine them in a thunderous international chorus of “Stop the massacre in Gaza”, we shake the very foundations of tyranny & injustice.