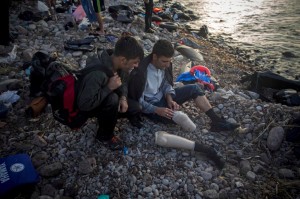 We aren’t told anything about these two men except they’re Afghan refugees who just arrived on a dinghy to the Greek island of Lesbos & that the one fellow is preparing his prosthetic leg to start walking immediately. That’s one tough & determined guy who before boarding the dinghy had already crossed overland 4102 km/2549 miles.

There are many reasons a person could become an amputee, including things like infections & tumors, but when a guy comes from Afghanistan it’s morethan likely he’s one of the over 25,000 people who had a limb blown off by a land mine. Afghanistan is one of the most heavily mined countries in the world due to the USSR occupation & the US-NATO war. They estimate there are still 10 million land mines & that one million Afghans live within 500 meters of one. And of course, US bombers are still dropping them.

For those who would defend the shameful USSR occupation, they dropped thousands of cluster munitions that looked like toy butterflies. When children chased them in delight, hundreds were blown up or disabled. That’s not liberation; it’s barbarism. That’s the thing about land mines–they don’t discriminate & children are as often victims as seniors.

An interesting thing about the Associated Press (AP) caption to this photo is the comment, “More than 500,000 people have arrived in the European Union this year seeking sanctuary or jobs.” The AP think they’re being foxy here by running interference for the EU which is already beginning to separate out political from economic refugees. Those determined to be the latter will be denied asylum & deported. Since the distinction is completely fallacious, not to mention despicable, many fleeing from war like the fellows here may be deported. Nobody crosses over 4000 km on a prosthetic leg just looking for a job.

Immigration is a human right! Open the damn borders! End the US-NATO war in Afghanistan!