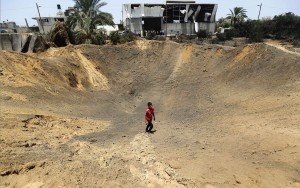 Attention is focused on Israel’s jackboot operation in the West Bank while massive Israeli bombing continues in Gaza over the two largest urban areas. We don’t know what poetic name Israel has given to the Gaza operation; they call the West Bank one “Operation Brother’s Keeper” but they’re both two phalanxes of operation ethnic cleansing.

Here a young boy walks inside the crater left by an Israeli airstrike in Gaza City where over half a million people live. The Israeli military say it’s retaliation for Hamas rockets but can they explain why the entire population has to be punished with bombing?