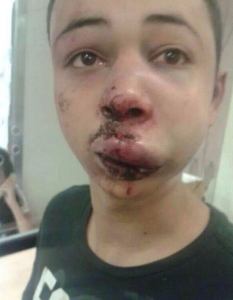 Social media is full of photos & reports about assaults on Palestinian children by Israeli occupying forces. It may be escalating but it is hardly a new tactic for Israel to target children. That is a hallmark of war, occupation, persecution, & genocide. Israel was formally accused of it by the UN & human rights groups after the seven-week bombing siege of Gaza.

This young boy was a victim of assault in one of the more notorious cases of July 2014 leading up to the bombing siege of Gaza. Then 15-year-old Palestinian-American Tariq Abu Khdeir was beaten into unconsciousness & stomped on by an Israeli border policeman following the kidnapping & torching murder of his 16-year-old cousin, Mohammed Abu Khdeir in occupied East Jerusalem.

Despite video documentation of the assault on Tariq, the policeman, whose identity was kept anonymous by Israel, was only sentenced to 45 days of community service & a suspended sentence of four months in jail. At the time, Tariq’s mother mother Suha Abu Khdeir said if her son hadn’t been a US citizen he would have been “just pushed to the side like a dog…left to rot in jail.”

Defend Palestinian children by honoring & promoting the economic & cultural boycott of Israel. Buy nothing with barcode beginning 729 & check every label.