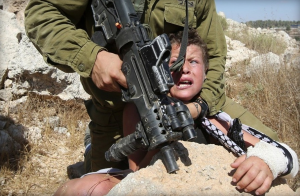 A Palestinian human rights group for prisoners reports that Israel has kidnapped & arrested 5,700 Palestinians, including 700 children, since the start of 2017. Most are manhandled, many are physically assaulted, some have been released, hundreds have been placed in administrative detention & held indefinitely without charge or trial.

The incident pictured here has become iconic of Israeli violence toward Palestinian kids. In August 2015, an Israeli soldier was assaulting 11-year-old Mohammed Tamimi from the Palestinian family noted for fearless activism in the West Bank village of Nabi Saleh. The incident became notorious internationally because Mohammed had a broken arm when he was assaulted & his sister, mother, & others jumped on the soldier to get him off the boy.

The most powerful way to stand with Palestinians is to honor & promote the economic & cultural boycott of Israel (BDS). Buy nothing with barcode beginning 729 & check every label.