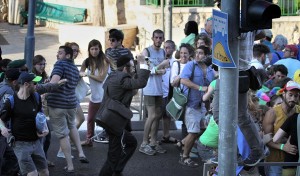 This is Israeli Yishai Shlissel attacking gay pride marchers with a knife last Thursday in Jerusalem; six were stabbed, two of them seriously injured. Israeli officials, including Netanyahu, are falling all over themselves disassociating from his actions. Netanyahu said the attack “contradicted the country’s basic values.” In fact what it contradicts is Israel’s elaborate pinkwashing of apartheid.

Much is being made of Shlissel’s ultra-orthodox Judaism but in fact he is a political product of Israeli colonialism, apartheid, & ethnic cleansing of Palestinians. It’s not Judaism but Zionism that turned his head upside down. He’s from Modi’in Illit, an Israeli settlement in the West Bank established in 1994 on the land of five Palestinian villages. He had to be at least 19-years-old when he moved there so he has a head stuffed full of entitlement.

Shlissel’s violence isn’t just a personal pathology; it is of a piece with the very nature of Israeli militarism. Those who live in other heavily militarized societies like the US, India, Mexico, know the problem well. Shlissel attacking gay activists derives from the mentality that agrees with carpet bombing Gaza over & over again, particularly targeting children; of the economic blockade of Gaza preventing essential medicines & foodstuffs from getting through; of soldiers attacking worshippers at Al-Aqsa Mosque; of aggressive settlers from all over Kingdom Come moving to the West Bank & expropriating Palestinian lands as though they were entitled to it; of settlers burning down Palestinian mosques in the West Bank; of torching family homes with people inside–burning to death a small child & seriously burning his family; of soldiers shooting down unarmed protesters, roughing up small children, & incarcerating thousands without due process; of uprooting entire villages like Susiya & the five villages Modi’in Illit is built on; of Israelis sitting in easy chairs watching ethnic cleansing in Gaza like it was a football game.

Israel is not & never will be the promised land of Zionism. It has no future but dystopia because it is built on carnage & lies. The only solution is a democratic secular state where Jews & Palestinians live as brothers & sisters. Those settlers who can’t deal with justice may just want to move back to where they came from.