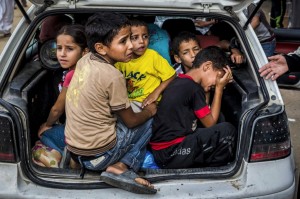 Israel is targeting children in Gaza & there’s no mystery why. When the Knesset politician called Palestinian children “little snakes” & called for their genocide she was expressing the colonial & racist mind that sees young among the oppressed as the enemy. This is not unique to Zionist racism & Palestinian children but is inherent to the psychology of racism.

Prior to the Civil Rights Movement of the 1960s in the US, racism toward Blacks, Latinos, & Native Americans had many cultural expressions–from playground games (like “eeny meeny miney mo”) to the cowboy & indian genre of film & comic books, to an entire catalog of insulting epithets, & to what was called pickaninny art. Pickaninny art wasn’t art at all; it was hate-mongering propaganda & it appeared in cartoons, postcards, venues of all sorts–& for decades. White kids grew up on this crap. What typified it was images of tiny Black children, infants really, in the most dire & threatening situation. Most commonly, it depicted a pudgy Black child hanging by one hand from a tiny branch over an alligator pit. When you look at this stuff, you get the willies; you understand you’re looking at evil, at hatred, at psychopathology.

What purpose could this stuff possibly serve & what’s the psychology behind it? Well if racism is institutionalized, as in the US & Israel (& everywhere else), then every new generation of the oppressed has to be broken & inculcated with self-hatred, trained to be obsequious & docile, chastened of every instinct of dignity & rebellion. It’s a never-ending process as long as the oppressed keep having babies. The oppressing apparatus hates this task & hates the children–but it fears them more. And they express that fear of youthful defiance in perverse cultural forms–like pickaninny art. The Civil Rights Movement swept this rubbish away (including the cowboy movies) & it did so in short order.

So it’s no wonder at all Israel is targeting children with its bombs & DIME shrapnel & flechette shells. It’s out to kill them, plain & simple. It doesn’t plan on living in peace or next door to Palestinians; it just wants them gone. But images of the mangled bodies & terrified faces of little Palestinian kids have gone round the world. Twitter accounts & social media are bursting with these images & there isn’t a way in hell Israel can control that or put their evil genie back in its stinking bottle.

Take a look at these little kids. They aren’t just the next generation of intifada; they are the downfall of Zionism, exposing its barbarisms & racist hatred for all the world to see. It’s all over for Israel; a fatal blow has been struck by innocent children seeking shelter from bombs. The end of Zionism won’t come easy & it won’t be soon but this murderous campaign marks the beginning of the end & the hope for Palestinian justice.

(Photo of children fleeing the bombing by Sergey Ponomarev/NY Times)