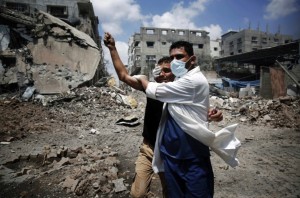 Many people have read the poignant–nay, horrifying–appeal to Obama from Dr. Mads Gilbert, the Norwegian doctor who has served in Gaza for many years. Gilbert is a long-time socialist & nobody’s fool; he doesn’t expect his description of catastrophe care in Gaza to change US support for Israeli apartheid & he knows appeal to Obama’s human sympathies is a waste of good ink. Gilbert is really reaching out to men & women of good will so we understand the carnage that is Zionism & the transformative power that is solidarity with Palestinians.

His description helps us see more clearly than in the past the role of medics–men & women with professional credentials to leave Gaza & migrate to good paying jobs elsewhere but remain there to serve. Defying international law, Israel (as the US in Iraq) is firing on hospitals & ambulances & killing medical personnel as they try to rescue the wounded & pick up the scattered remains of the dead.

There’s been discussion about how well solidarity is or is not served by circulating gruesome photos of mangled children. As we know from the hills of Sderot, Zionists & those who support Israeli apartheid can witness ethnic cleansing not just with equanimity but with glee. But most of us cannot bear to witness such unspeakable evil. It isn’t that “human kind cannot bear very much reality,” in the words of T.S. Eliot, but that we cannot bear to stare the horrors of ethnic cleansing right in the face. Human hearts & psyches aren’t made like that as we’re forced not just to witness it but collude with it more & more as capitalism spirals into its barbaric phase.

It really wasn’t until the Vietnam War that psychic damage to those conducting colonial wars was acknowledged publicly which probably came from antiwar resistance among soldiers & veterans. And now we see reports that many Israeli soldiers have committed suicide rather than continue duty in Gaza.

Imagine then, as Gilbert describes in his letter, that medics working round the clock without respite handle hundreds of children, men & women with charcoaled skin from DIME shrapnel, bodies punctured with flechette darts, bodies missing limbs, & sights so gruesome they may never again sleep well & they will never be the same. They serve while Israeli airstrikes come after hospitals & ambulances & target medics trying to pull survivors out of cement rubble & pick up bodies strewn in streets.

There are no words to express the honor these men & women deserve; there are no words to console them as they weep while they treat injured & prepare the dead for burial. But Dr. Gilbert said it best: the medical help solidarity can best render is to stay in the streets demanding “Stop the massacre in Gaza!”

This medic is helping an injured man in Gaza City in the Shejaia neighborhood which Israeli bombers went after with a vengeance, leaving the streets strewn with Palestinians (on the 20th).