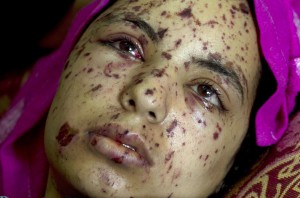 This is 17-year-old Rawya abu Jom’a at the Shifa hospital in Gaza City during Israel’s Operation Ethnic Cleansing last summer. She suffered severe shrapnel injury when Israel bombed her family’s apartment. Three of her cousins & her sister were killed in the strike.

The photo is also by conflict photojournalist Heidi Levine who was just awarded for her photos of Gaza by the International Women’s Media Foundation. Another photo in the album was the funeral of three young boys killed near their home & was captioned “allegedly by an Israeli drone strike.” Are they sure it wasn’t by an evil fairy from outer space!? What despicable equivocation when it comes to Israeli war crimes!

This photo should also be submitted to the UN to document Israeli war crimes in Gaza. If nothing else, it will shame them for collusion. Or is shame not in their repertoire of emotions?

Build the hell out of the economic & cultural boycott of Israel (barcode beginning 729).