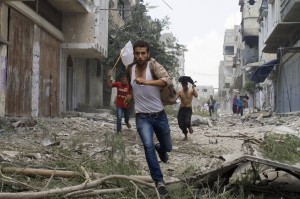 Heidi Levine, an American photojournalist who became a settler to Israel in 1983, was just given an award by the International Women’s Media Foundation for her work in Gaza during Israel’s Operation Ethnic Cleansing last summer. She has been a combat photographer for a long time in both the West Bank & Israel & has also worked on assignments in Jordan, Syria, Iraq, Egypt, Kosovo, & Afghanistan. This photo from Gaza City shows she was often in the midst of Israeli bombing. These men with the white flag are in the Shejaia residential neighborhood which Israeli bombing reduced to mountains of cement rubble & made thousands homeless.

This photo needs to be submitted to the UN as documentation of several Israeli war crimes in Gaza because under umpteen international laws “The right of belligerents is not unlimited.” Some of the most obvious violations seen here include attacking those who are unarmed or who have surrendered; bombing “to cause superfluous injury”; bombing towns, residences, or buildings which are not militarily defended; & bombing without warning authorities. Otherwise, it looks very much like genocide.

The UN of course won’t do squat with the evidence since they collude with Israel but that’s no reason not to “hold their feet to the fire.” Since the UN can’t be relied on for justice, there’s only one recourse & that is to build the economic & cultural boycott of Israel.