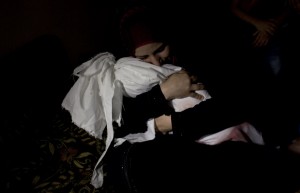 It’s often impossible to wrap your mind around Israeli barbarism against Palestinians & the perfidy of those who defend it. As Israeli bombers hammered Gaza for 51 days last summer, taking out schools, hospitals, entire residential areas, the rabid Zionist Eely Weasel (known by his stage name as Elie Wiesel) took out full-page ads denouncing Palestinians for using their children as human shields; the US Pentagon was supplying millions more in military equipment to Israel; & UN Secretary-General Ban Ki-moon was running around like a chicken with his head cut off to cover for Israeli human rights & war crimes.

Those who ridicule internet activism don’t understand the role activists & supporters of Palestine played on social media by circulating to millions the images of ethnic cleansing coming out of Gaza, in particular the horrific crimes against children. Were it not for that massive exposure, Israel would still be crooning “The Exodus Song” instead of making strident protests against BDS. We should not underestimate how much that social media campaign & the international protests of over a million people changed things.

One of the most significant changes is that several organizations including several Palestinian human rights groups, Save the Children, War Child, B’Tselem (an Israeli human rights group), & UNICEF were pressing to include the Israeli military on a list of grave violators of children’s human rights alongside the Islamic State (ISIL), Boko Haram, & the Taliban. Who could have imagined such a development just six years ago after Israel’s 23-day bombardment of Gaza which they named Operation Cast Lead or the eight-day bombardment in 2012 called Operation Pillar of Defense?

Putting aside the fallacies of such a list & the major omissions which should certainly include the US, NATO, Indian, & other armies, this move to identify Israel with the Islamic State is an astonishing political development that must have the Israeli government reeling–along with its Zionist apologists like Weasel. It should give pause to UN officials who are being disgraced & exposed before the world for running interference for Israeli ethnic cleansing instead of applying sanctions. It may in part explain the phony psychodrama being played out between Obama & Netanpsycho–as an attempt to take distance in rhetoric if not in military aid from egregious Israeli war crimes.

It would be such a catastrophic political setback for Israel that their officials bullied UNICEF officials into backing down. For now Israel will not be ranked as a psychotic state but the damage is done. According to a UN source, the human & children’s rights groups involved “are in uproar” over UN officials backing down & continue to press for Israel to be ranked with ISIL. The affinities between Israel & ISIL are apparent to all so we should be frank: it’s not that Eely Weasel & other Zionists don’t see that but that their racism & supremacy is so rancid they don’t give a damn & can’t acknowledge the humanity of Palestinians.

This is Netream Netzleam holding the body of her one-year-old baby girl named Razel who was killed by Israeli bombers last July. The photojournalist Heidi Levine took it at Razel’s funeral. The media caption to the photo said “medics said she died from injuries sustained in an Israeli air strike.” They can drop the equivocations now & just say outright that Razel is another Palestinian child targeted by Israel’s psycho military.

Build the economic & cultural boycott of Israel & demand no aid of any kind to Israel.