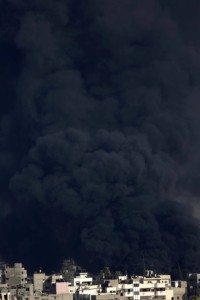 Zionist Armageddon: this is Gaza City today–a genocide made in the USA. It’s no surprise Obama is talking out of both sides of his ass again. He wrings his hands & whimpers for Israel to cease fire but media report the Pentagon just restocked Israel’s arsenal with several types of ammunition, including mortar rounds & ammunition for grenade launchers.

There have been massive protests in the US as well as around the world & thousands will be on the street again this weekend. Those who live in the US have a special responsibility to get out in the street with placards since our tax money pays for this catastrophe. We owe justice a special debt.