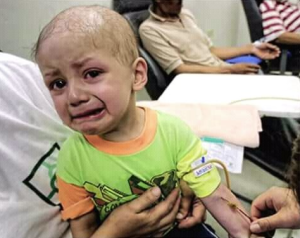 Israel has announced a rapid response joint program with “Diaspora Jewry”–by which they mean leading Zionist groups like the World Jewish Congress & lobbying groups like AIPAC, (i.e., those who have no more connection to Palestine than Irish-Americans to the Rhineland)–to counter BDS initiatives. The Israeli official in charge called it a “PR commando unit” so that when BDS appeals to an artist to honor the cultural boycott, Israeli & Zionist groups can go into full-throttle vilification.

This photo is a Palestinian child in Gaza with cancer. The photo is from 2015 but today there are over 13,000 cancer cases in Gaza with an absence of 230 medications to treat them because of Israel’s blockade of Gaza. This is what the cultural & economic boycott is all about.

(Photo shared by many media sources)