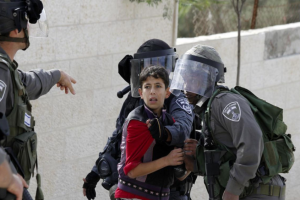 Palestine Prisoners’ Centre reports that just in January 2018, Israeli forces abducted 520 Palestinians in the occupied West Bank, Gaza Strip, & East Jerusalem. Ninety-two were kids (the youngest was 11-years-old), 15 were women, 18 were from Gaza, including six fishermen abducted while fishing off the Gaza coast.

There are an estimated 6,500 Palestinians incarcerated in Israeli military prisons, including 350 children, 57 women & girls, & 400 under administrative detention (which means indefinitely without charge).

This photo is one of the many taken just in January of Israeli occupying troops ganging up on, manhandling, & arresting a Palestinian teen or adolescent. It cannot be stated often or strongly enough that children are targeted in war, occupation, & genocide precisely to destroy a new generation of resistance.

Stand with Palestinians & their youth that they may defeat Zionism & build a society based on equality, brotherhood & sisterhood between Palestinians & Jews.

(Photo of boy being arrested from Days of Palestine)