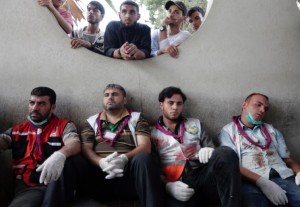 We should take a moment to honor the medics of Gaza who have seen horrors too barbaric to imagine, who try to rescue people from cement rubble & gather dismembered remains strewn on streets while Israeli fire is directed right at them–in violation of umpteen international laws & by every standard of human civilization. More documentation for Israeli war crimes which the UN doesn’t see as they shake their decepit naughty fingers at both Israel & Hamas.

Here they rest after gathering those wounded in an Israeli airstrike on a market place in Gaza City during what was supposed to be a four-hour humanitarian ceasefire. The ceasefire excluded “areas of conflict,” a psychotic military nuance Gazans weren’t informed about. And anyway, who would think vegetables venders would be a hotbed of Hamas? But of course, if schools, mosques, hospitals, & refugee centers harbor rocket launchers & tunnels, then they’re just as likely to be hidden under potatoes & turnips. So as Palestinians came out of cover to get food, Israel picked them off, killing at least 15 & injuring many others.

“We’re tired of war. I, for one, have had enough of bloodshed, death & destruction. But I also can no longer tolerate the return to a deeply unjust status quo. I can no longer agree to live in this open-air prison. We can no longer tolerate to be treated as sub-humans, deprived of our most basic human rights. We are trapped here, trapped between two deaths: death by Israeli bombs & missiles, & death by Israel’s blockade of Gaza.” (Mohammed Suliman, Palestinian human rights worker in Gaza, “From Gaza: I would rather die in dignity than agree to living in an open-air prison”)

And we can no longer tolerate the systematic ethnic cleansing & dispossession of Palestinians either. The movement for Palestinian justice is the most important freedom movement in the world because before our very eyes Israel is hell-bent on exterminating them–& because their struggle has the power to destroy the foundation of US & European neoliberal colonialism in the entire Middle East. Israel was set up as a military outpost for US economic & political interests in the region, not as a Jewish haven from persecution. It’s Zionist leaders understand that very well; unfortunately the increasingly psychotic population of Israel does not.

The only possible solution to this conflict is a democratic secular state where Jews & Palestinians can live as brothers & sisters. The two-state solution is nothing but Palestinian bantustates & a prescription for continued ethnic cleansing & dispossession.

All out this weekend demanding “Stop the massacre in Gaza!” Honor the economic & cultural boycott of Israel (barcode beginning 729) & stand on the just side of history to create a world where men & women can live in peace.