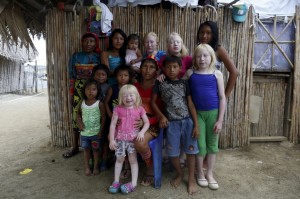 This is a Kuna mother surrounded by her children (family not named in articles). The Kuna (also called Guna) are an indigenous people who live in Guna Yala, an autonomous archipelago off the coasts of Panama & Colombia. They have the highest rate of albinism in the world.

In some countries like Tanzania & Uganda, albinos sustain threatening, even deadly discrimination & persecution & are considered a curse on the family. In countries like the US, such social tensions are avoided by making people with disability invisible. They’re expected to stay out of public view & live in a parallel universe so the rest of society is not uncomfortable.

Traditionally, Kuna albinos were viewed as sacred, venerated, & gifted as Children of the Moon or Grandchildren of the Sun. With outside intervention from European cultures, that heritage is not always honored.

Albinos are of course not a curse but they do have special health problems, especially in the tropical sun where they suffer high rates of skin cancer & vision problems.

The contrast between viewing those with disability as sacred or a curse or invisible highlights the compelling need for humanity to stop constructing false explanations & hateful solutions for those born different but the same. To paraphrase the Roman writer Terence, “no human being is alien to us.”