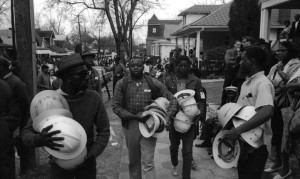 This photo isn’t dated but it’s from the early Civil Rights Movement in Montgomery, Alabama where the 1955 bus boycott against Jim Crow (the US form of apartheid) launched that historic struggle which continues to inspire millions around the world.

Activists here are distributing helmets after an assault on protesters by a “mounted posse.” These so-called posses weren’t vigilantes but were deputized thugs, often including members of the KKK.
This photo resonates with millions of protesters around the world today who come to protests equipped with gas masks & use metal barriers against barbaric attempts to curtail the democratic right to oppose tyranny.