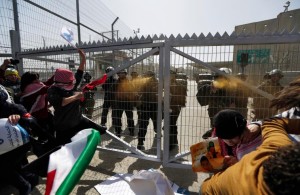 International Women’s Day came out of the socialist movement & women’s unions. The first march organized by the Socialist Party was of women garment workers in NYC in 1908 but socialist women then organized to take it international. Whether or not you like socialism, that history cannot be denied. But that’s also why it went moribund in the US until the women’s movement of the 1970s resurrected it.

The UN did not make it one of their special ceremonial days in 1977 to maintain the radical history or it’s association with social struggle but to preempt that & turn it into something sentimental, more like Valentine’s Day. Actually the UN & US government (often in the person of Hillary Clinton) continue to wrestle the feminist agenda out of radical & activist hands to make it a ceremonial & ineffectual thing with no relationship to women’s lives except in rhetoric.

The scale of economic, social, sexual, political violence against women around the world is more than most minds can take in with equilibrium. “Discrimination” is too paltry a word to describe the barbarism. The neoliberal elite, whose interests the UN brokers, are dependent on racist & misogynist barbarisms to operate modern capitalism. The whole damn monstrosity would collapse without those twin pillars of social hatred & inequality. That’s why they worked so hard to railroad the women’s movement (& the civil rights movement) into the Democratic Party which has no affinity with social struggle & justice. It’s why they started holding international conferences of elite women & excluding activists which try to make women’s reproductive freedom a population control/eugenics issue. It’s why the UN & regimes around the world try to turn International Women’s Day into a love fest rather than a declaration of war against misogynist policies & practices.

In China, that was played out in the most dramatic way when the regime just arrested five women’s rights activists for organizing a protest against sexual harassment on public transportation but allowed a troupe of belly dancers to celebrate it in Taiyuan. No one objects to cultural celebrations of the day; feminists made that part & parcel of the event because the day is about women’s contributions as well as a political campaign. But pulling a switcheroo to make it cultural & repress the political is an outrageous maneuver.

The US military in Afghanistan, who claim they’re occupying & bombing to liberate women, held the most malignant ceremony in Kandahar province with US-trained Afghan women border police (who to their credit looked miserable) & US women soldiers standing at attention. Presumably they all had their nails done by that salon in Kabul which is the hallmark of emancipation US-style.
Women’s rights activists don’t do well standing at attention. It’s not the style that suits rebellion against violence & injustice. Thank heavens there were protests all over the world organized by women & their character was political because our problems are massive.

This is a photo of Palestinian women holding an International Women’s Day rally (on March 7th) at the Qalandiya checkpoint of the apartheid wall (in the West Bank near Ramallah). Israeli border police are assaulting them with pepper spray, just as they did at the same event last year. That is the real face of UN & US attitudes toward International Women’s Day.