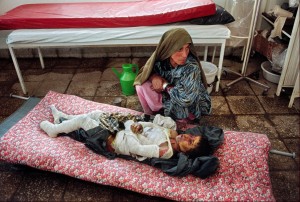 When US-NATO invaded Afghanistan in October 2001, the rationale was retaliation for 9/11, to hunt down Osama bin Laden hiding in a cave & kill him, & to rout out Al-Qaeda & kill them. We’ve heard several other reasons as the US extemporizes it’s way through an illegal occupation for now 13 years. While Secretary of State, Hillary Clinton said the US should “get the people who attacked us” but she never explained why that entailed bombing out the whole country & facilitating drug trafficking. Obama called the war the necessary war but he’s never explained what it is necessary for.

Now we’re told the US continues to run thousands of drone sorties to help the Afghan government build up their own military & build Afghan institutions so the country has good governance–because we all know from the Pentagon that Afghanis are too primitive to do it themselves without the prod of massive bombing. That also explains why US military planes fly tons of drugs out for processing in other countries.

Switch & bait has become an invaluable propaganda device; during Israel’s Operation Ethnic Cleansing in Gaza Zionists beat it to death asking why over a million people around the world marched in solidarity with Palestinians but paid little heed to Syria. They emphasized their point by comparing death figures between Gaza & Syria. This was not an expression of solidarity with the people of Syria either against Assad or the US but an attempt to make Palestinian solidarity activists appear anti-Semitic.

Although Palestinian solidarity protests dwarfed those against US wars in Afghanistan, Iraq, & elsewhere, the antiwar movement never made such detestable comparisons but was among the most active builders of Palestinian solidarity. There was no axe to grind, no ulterior motives involved, no second-guessing of political movements, but only an understanding of the connections & the need for solidarity.

The important question of why the antiwar movement is so weak when the need is so great has not been sufficiently addressed in any political venue so that activists can understand & not be discouraged. But Palestinian solidarity forged new allies, new collaborations, & brought in tens of thousands of new forces who can help regenerate not just the antiwar movement but the entire movement for international solidarity. The gospel & iron law of social transformation is “An injury to one is an injury to all!”

This photo of a bombing victim in a Kabul hospital shows the price Afghanis are paying not to keep the streets in the US safe from Al-Qaeda but to keep them flooded with illegal drugs from the international drug trade which the US government facilitates. That is not a matter of conspiratorial speculation but is fully documented, including by Congressional hearings held by John Kerry.