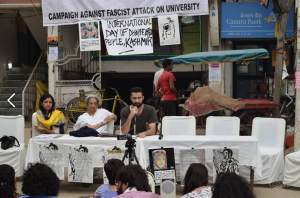 Today is the International Day of the Disappeared. Hundreds of thousands of people have been disappeared in nearly 50 countries that employ such criminality to destroy dissent. Most victims face torture, unspeakable deaths too gruesome to describe, & mass graves. It is a human rights crime of incalculable proportion.

Students in India from the Campaign Against Fascist Attack on University organized this event today in New Delhi called “State repression in Kashmir & movement for self-determination” about the estimated 10,000 who have been disappeared in Kashmir.

We should take a moment to honor the disappeared in Kashmir & around the world for their contributions to the cause of democracy & freedom. There is no justice for such monstrous crimes except to end the regimes that commit them against our brothers & sisters.

Our fullest solidarity with the activists who organized & attended this event & for all who campaign against this crime.