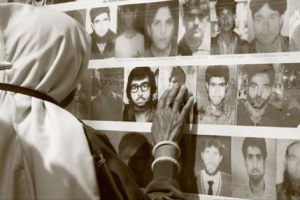 Since the armed uprising of 1989 against the Indian rule in Jammu and Kashmir, around 10,000 cases of enforced disappearance at the hands of Indian soldiers have been reported. The State is not only denying truth and justice to the victims but also assures impunity through draconian laws to the perpetrators. Flesh, bones and souls reduced to mere statistics.

Association of Parents of Disappeared Persons (APDP) by the very act of its being is resisting the state oppression and is also playing an important role in keeping alive the memory of loss that is being erased systematically from the public domain. Every year 30th August is commemorated as the International Day of Disappeared.

This year as we enter the 52nd day of siege in Kashmir, more than seventy people have been killed, thousands have been tortured, blinded and maimed. As the valley of Kashmir continues to real under military siege we have not been able to hold the annual sit-in protest on the occasion of International Day of Disappeared.

However, on this occasion many friends across the globe have expressed their solidarity with APDP by organizing campaigns against enforced disappearances in Kashmir. Friends of APDP in Bangalore, Delhi, Kolkata, Sweden and United Kingdom are organizing sit-in to express solidarity with our struggle. In Srinagar many friends have started series of online campaigns in support of our struggle. We are extremely grateful to Kashmir’s exclusive creative communications agency, BlackSheep.Works for developing a solidarity campaign comprising 7 posters and a video for us. They have working tirelessly for weeks to make our online campaign a success.

To commemorate the struggle against Enforced disappearances in Kashmir, APDP appeals to the international community to put pressure on the Indian state to immediately stop all forms of violence against the people of Kashmir. APDP strongly believes that while documentation of torture and human rights violations that APDP undertakes is very critical to its fight for justice, it is also conscious of the fact that without sustained relief and assistance to families suffering violence, seeking justice will be a meaningless exercise. APDP is aware of the struggles of women in negotiating everyday life in the context of ongoing political crisis in Kashmir.

With hundreds of young boys being blinded in pellet firings such victims and their families will become further vulnerable to range of exclusions and deprivations. School going children who have suddenly lost eyesight in pellet firings will be excluded from the whole education system, similarly young victims of pellet firings who may have been in employment may not be able to continue their jobs. The families of such victims may not even have material and non-material resources to cope up with such crisis. As a collective of families of the victims of enforced disappearances APDP has first-hand experience of such deprivations and exclusions.

APDP announces Equal Opportunity Facility for Justice, Assistance and Relief for People Blinded by Pellets (EOFJAR). Through this facility APDP aims to create a support network for the victims of pellet injuries including injuries leading to blindness. As parents and relatives of the victims of enforced disappearances we are not unfamiliar with the Indian state’s architecture of oppression. Last twenty years of our struggle for justice and liberty is witness to the fact that in Kashmir elaborate oppressive apparatus of Indian State ensures control over every aspect of our lives. The fair and impartial trials, which have historically been the cornerstone of civilized regimes across the globe, are impossible in case of Kashmir.