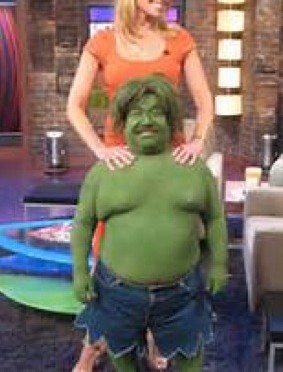 Does anyone else wonder at the inexplicable comedic success of Chelsea Handler? She’s good at interviewing celebrities without slobbering & groveling–something Oprah & Ellen could never lay claim to–but her wit is leaden, banal, & focused on celebrity gossip.

Her biography provides little clue to her success because while she came from wealth, it was not tied to the entertainment industry. Although it probably isn’t accidental that her fame crescendoed after a relationship with an entertainment executive.

She wouldn’t be the first witless TV host but what makes her not just leaden but particularly offensive is her relationship with Chuy Bravo (born Jesus Melgoza), her sidekick on the show who she calls her “little nugget.” Bravo is a Mexican-born little person who won the part not through association with Handler but by auditioning when they put out a casting call for a little person.

Bravo claims he doesn’t object to her humiliations because she opened doors for him when he was recovering from alcoholism, cancer, & near-homelessness. He says she taught him “to be humble.” As if an immigrant in the US needs to be taught that by a well-heeled celebrity!

Blacks, Latinos, Native Americans, & little people have to learn to eat manure if they want to have a career in entertainment. They have to play the fool, the pimp, the hustler, the drug dealer, the prostitute, the maid, the butler, the slave. Black families are portrayed either as wealthy professionals or dysfunctional because reality & respectful depiction are beyond the capacities of Hollywood. Anyone questioning that indictment should have watched the 2014 Oscars award show.

(Photo of Handler & Chuy from her show, Chelsea Lately, attests to the indignities he endures for fame.)