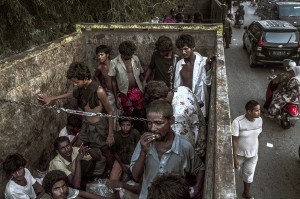 Just because you’re poor & undocumented doesn’t mean you don’t know when you’re being treated like cattle–or that it’s okay to treat you like that. These are Rohingya men & boys rescued in Bayeun, Aceh province, Indonesia being transported in a truck to a detention center.

Indonesia has a great big military with all sorts of personnel carriers. Couldn’t they have commandeered a couple of those to transport the immigrants with some measure of comfort & dignity? Or at the very least couldn’t they have cleaned the manure out of this truck before they loaded it up with exhausted, malnourished people?

When Indonesia hosted the Asia-Africa Conference (AAC) last month with politicians & dignitaries from all over the world, did they transport them around in unwashed manure trucks? Or did they provide limousines? Or at least buses?

The conference was formed 60 years ago to oppose colonialism, address poverty & underdevelopment, “craft a new ethos of international relations,” “practice tolerance & live in peace with one another as good neighbors.” Is moving people around in manure trucks the best way to do that?

At the AAC meeting Indonesian president Joko Widodo chided the UN to reform to put “justice for all nations first” because “the global imbalance is getting more & more suffocating.” No one knows that better than the Rohingya.