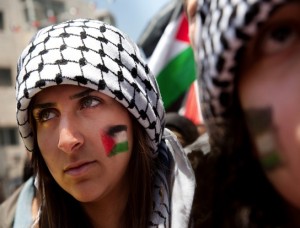 There are some very troubling signs in several countries indicating collusion between governments & the Zionist movement in the political containment of BDS & intimidation of the growing Palestinian solidarity movement. There have been several initiatives under the guise of identifying anti-Zionism with antisemitism: one is the lawsuit against the Palestinian Authority in a NY court by Shurat HaDin, the Israeli law firm associated with Mossad, for aiding & abetting terrorism; there are legislative initiatives in the US against companies honoring BDS; a Palestinian support event was banned on a university campus in England; a professor in Australia is being prosecuted for supporting BDS; a Canadian official is talking about making BDS activity illegal;

The Palestine Solidarity Legal Support (Palestine Legal), in conjunction with the Center for Constitutional Rights (CCR), released a report this week saying in the US they had 102 requests for legal assistance from campus solidarity activists just in the first four months of 2015 after being harassed & intimidated as antisemitic or supporters of terrorism.

Shurat HaDin, which received training from the Southern Poverty Law Center, has on its masthead: “Bankrupting terrorism–one lawsuit at a time.” And that is certain to be a method they will employ against BDS groups to tie up resources & personnel in civil liberties law suits.

Shurat HaDin calls itself a civil rights organization. They would not be the first organization to identify their purpose with high principles to carry out anti-democratic & politically reactionary work.

Now in an interview in Atlantic magazine, Obama linked Israel’s right to exist with the struggle for civil rights in the US–which he hasn’t lifted a finger to advance. “There’s a direct line,” he said, “between supporting the right of the Jewish people to have a homeland & to feel safe & free of discrimination & persecution, & the right of African-Americans to vote & have equal protection under the law.” There’s a direct line between colonialism & voting rights? We only wish our man would allocate as many resources to protecting the US Black community from police violence & discrimination as he does to an apartheid state engaged in ethnic cleansing.

What concerns Obama & Israel & all their Zionist front groups is not civil rights for Black Americans but the new political solidarity forged between Palestinians & the Black community after Ferguson. Such a dynamic would be disastrous for Israel’s apartheid project. That’s why Zionist groups organized buses to attend rallies in Baltimore. Civil rights for Blacks is only to cover their ulterior motive of linking Zionism to justice–with which it is absolutely incompatible since Zionism is based on a rejection of the broader struggle against colonialism & racism. Zionism is racism & it has been unable to contain that reality within Israel itself by discrimination against Palestinians, Ethiopians, African refugees, & occupation of the West Bank & Gaza.

There is no reason to be daunted by the crescendo of Zionist attacks. They only emphasize the importance & the power of BDS. What they signify so clearly is the historical importance of the Palestinian struggle. It is surely one of, if not the most important political struggle in the world today. Palestinian Intifada stands as a beacon to suffering humanity. It is, for the US, not just a matter of controlling the Middle East but of destroying the exemplar of popular struggle against tyranny & colonialism which the Palestinians represent.

Our commitment must continue to be building the economic, cultural, & educational boycott of Israel so that we may contribute to forging a democratic, secular state where Jews & Palestinians live as brothers & sisters–& stand united against colonialism, racism, & social hatreds of all kinds.