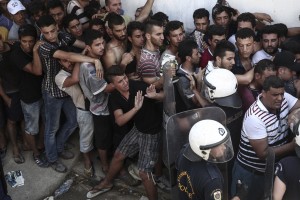 These men are refugees queued up for hours inside a football stadium on Kos to register for immigration papers so they can move further into Europe. The stadium is described as “sunbaked” without food, drinking water, or toilets. It reminds us of nothing quite so much as that football stadium in New Orleans during Hurricane Katrina. People crowded together, hassled by police, sprayed with water cannons panic in those situations.

The Greek government claims it’s dispatching a ship to Kos to double up as “an accommodation & processing center” for the 7,000 refugees waiting to apply for immigration papers. No one should kid themselves “accommodations” means that SYRIZA is providing housing for refugees whilst retirees are living in or on the edge of homelessness.

The refugees coming through Kos are from Syria, Pakistan, Palestine, Iraq, Afghanistan; they’re on the run from war & bombing. And this is the treatment they receive!?