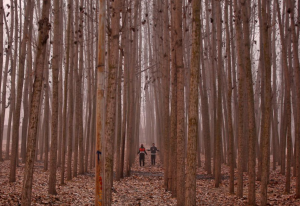 Reuters published this photo from yesterday with the caption: “Men exercise amongst the trees on a cold winter morning in the outskirts of Srinagar.”

Meanwhile in Srinagar, three prominent political leaders, including Syed Ali Geelani, had issued a call for a freedom march led from their respective residences to Lal Chowk square in Srinagar. It’s true the march didn’t come off because the occupying army imposed a curfew & other restrictions to prevent it. But there was a huge deployment of security forces outside the homes of two of them who prevented them from leading the march by locking the gates from outside.

One of the leaders managed to elude the authorities & attempted to lead the march but was then caught & arrested by police. A lot of action going on in Srinagar & this is what Reuters chose to publish.

This kind of coverage is not the fault of Danish Ismail, the photojournalist for Reuters. He has a considerable body of work documenting the occupation including the last 150 days of a barbarous siege. At the end of last August, police & paramilitary forces attacked his home whilst he was away & only his wife & small daughter were home. They damaged the home & terrified his family. His wife fainted & his daughter, shivering from terror, had to be taken to hospital. Ismail said a police officer had earlier warned him against covering protests.

Rather than publishing this kind of photo as a cover for the Indian military occupation, Reuters should be screaming bloody murder to Indian prime minister Modi about threats & intimidation against their reporters. Ismail should not have to fear for the safety of himself & his family for covering the occupation of Kashmir.