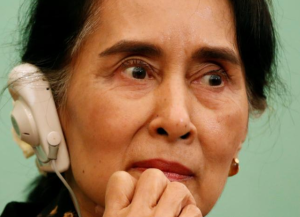 If Aung San Suu Kyi looks progressively more deranged it is because she has seen her reputation go from astral status as a champion of human rights to the face of the Rohingya genocide by the Burmese military.

Last Friday during a visit to Singapore, she accused the “international community” (whoever the hell that would be) of stoking & drumming up resentment between Buddhists & Muslims in Arakan state & appealed for an understanding of Burma’s ethnic complexities. “It doesn’t help,” she said, “if everybody is just concentrating on the negative side of the situation in spite of the fact that there were attacks against police outposts.”

Among most politicians there are only degrees of smarmy & with that defense of genocide she advances to the astral degree of smarmy where she once reigned as human rights champion. What is going on in Arakan state is not ethnic nor religious conflict between Buddhists & Muslims–except in so far as the Burmese military incites right-wing nationalist Buddhists to rabidity, arms them & sets them loose on Rohingya communities.

The attacks against the border guards on October 9th were blamed on Rohingya Muslim insurgents linked to ISIS or al-Qaeda for which there is not a shred of evidence. “The negative side of the situation” to which she refers so coyly includes the torching of entire Rohingya villages, mass rape, mass arrests, extrajudicial executions, hundreds injured & killed, & as of this morning nearly 22,000 Rohingya refugees fleeing for their lives to Bangladesh.

She must have always been a fraud to fall from grace that fast. What she should be looking at from that “international community”–which in fact is silent as a church mouse about the genocide–is formal charges of genocide against Rohingya Muslims. But it really isn’t them she’s worried about because they have done nothing to expose or oppose the genocide for decades. She’s worried about the growth of international solidarity initiated by Rohingya refugees. Genocide is no longer Burma’s dirty secret but stands exposed before the entire world.