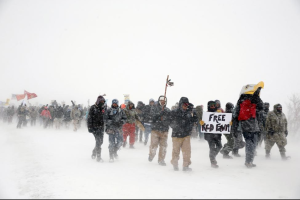 Native American activists & supporters at Standing Rock didn’t buy the “fake news” that the Obama administration & US Army Corps of Engineers denied permission to the pipeline company to drill under the Missouri River. Neither did some media.

Most considered the denial a ruse to disperse thousands of activists & leave the Standing Rock Sioux to face phalanxes of North Dakota law enforcement & private security forces on their own. It was also suspected as temporizing until Trump takes office next month. Trump is an investor in the pipeline company behind the project & the CEO donated to his campaign.

The activists were given an eviction notice from the encampment for yesterday but are refusing to budge. That’s how you deal with “fake news.” You don’t demand it be banned; you just ignore it.