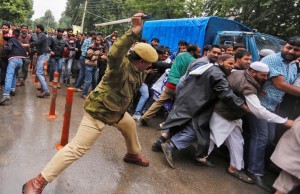 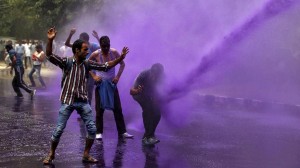 These photos are of the several year long strike in Indian-occupied Srinagar by public service workers, teachers, health workers demanding payment of wages in arrears, regularizing their temporary jobs, & raising the retirement age by two years since India provides no social security. (There have been frequent protests in India proper for social security pensions.)

The Reuters photo on the top from yesterday has the exact same caption verbatim as the one on the bottom from a year ago. Except that in the top one, the Indian policemen is identified as using a baton against protesters & in the 2015 one they are identified as using dyed water.

Almost all reporting about this strike has focused on the habitual use of water cannons with purple rain. Headlines in western media say “Indian police use cannons filled with bright coloured water to fend off protesters” & “Purple dye used by police in Kashmiri city to identify suspects for arrest.” Who’s fending off who here? And identify suspects for what crime? They’re demanding back wages, for heaven’s sake, not storming the bastille.

The use of disproportionate force against striking & protesting workers is of a piece with the brutal methods of Indian military occupation in Kashmir. High velocity water cannons are assaultive & extremely dangerous in several ways, including knocking people down, damage to internal organs, eye injuries (including blindness), broken bones, panic, & death.

The history of water cannons against protesters is politically telling about the regimes that use them. They’re manufactured primarily in the US & UK & exported to oppressive regimes all over the world but they were first used for crowd control in 1930s Germany when Hitler came to power. The US used them most notably against the civil rights movement in the 1960s & England reportedly used them (including with purple dye) in Northern Ireland in the 1970s. They are no longer used in the US or UK–which doesn’t mean they won’t be again.

Water cannons with dye added–first experimented with in Northern Ireland–were made notorious against the anti-apartheid movement in South Africa. At the now-named Purple Rain Protest in Cape Town in 1989, police turned purple water cannons on thousands of peaceful protesters who stood their ground politically by getting on their knees rather than back down against the assault. One of the protesters leapt onto the water cannon vehicle, seized the nozzle, & turned it away from protesters on to the facades of nearby buildings.

Many regimes use water cannons (including Argentina, India, the Philippines, Malaysia, Hungary, Zimbabwe, Uganda, Egypt, South Korea, Ukraine, Afghanistan, Germany, South Africa, Israel, Turkey, Indonesia). The most repressive put additives, including dyes, in the water cannons. Deaths were reported in Indonesia (in 1996) when the regime added ammonia; in Zimbabwe (in 2007) when peaceful protesters panicked; in Turkey (in 2013) when liquid tear gas was added; in the Ukraine (2014) when a man got pneumonia from being sprayed in freezing temperatures. Israel routinely uses a foul-smelling additive called Skunk against Palestinians. One journalist exposed to Skunk said, “if you mixed dirty diapers with not-so-fresh road kill & left them all in the sun for a few days, you might get an idea.” The smell of Skunk stays for days despite repeated washing & scrubbing.

After the 1989 anti-apartheid protest in Cape Town, purple rain became a symbol of protest & graffiti proclaiming “The Purple Shall Govern” appeared everywhere. Let the purple govern in Kashmir.

Our fullest solidarity with government workers in Kashmir.