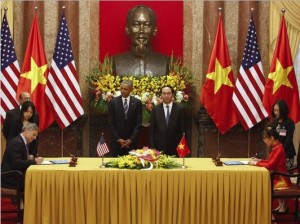 It is deeply sad to see the course that Vietnam’s Stalinist leadership is taking the country after the historic struggles against French colonialism & US military aggression. The country is now led by two Communist Party (CP) functionaries who appear to have played no role at all in the military struggle against the US: president Tran Dai Quang & CP leader Nguyen Phu Trọng.

China provided minimal aid in the war against the US & is now involved in maritime territorial disputes with Vietnam. But Vietnam is taking the same economic & political course as China, combining neoliberal economics with repressive political rule. Actually, Stalinism, like military rule & dictatorship, is a perfect fit for neoliberal capitalism.

Several human rights groups, notably Human Rights Watch, have objected to the new US military arrangement with Vietnam–brokered by Obama on his recent visit to the country. The US is lifting the ban on sale of lethal weapons to Vietnam–not just to exacerbate the conflict with China but as part of the US military buildup in the Asia-Pacific region. These so-called human rights groups do not object to building up Vietnam’s military arsenal as a phalanx of US military might in the region but because Vietnam jails political dissidents.

Vietnam has an estimated 400 political dissidents in jail–some of them for opposing neoliberal land grabs. Those receiving the most media attention are Catholics & it’s portrayed as an issue of religious freedom. In fact, they are the conservative opposition who played a reactionary role during French colonialism & in South Vietnam where the Catholic Church was the largest landowner. In a democracy, both rightwing & progressive forces should have the right to dissent state policies. But it’s likely the majority of political prisoners oppose the course the Vietnamese leadership is taking because it is a betrayal of economic & political democracy & of the long Vietnamese struggle against colonialism. Over 3 million people died in the Vietnam War.

In the 1980s, the leadership of Vietnam cast its lot with the IMF & World Bank, transforming the economy into private enterprises & a market-based economy. Thousands of companies have been privatized since then. Just between 2014 & 2015, Vietnam targeted the transfer of 432 businesses to private investors, mainly foreign multinationals.

Until recently, most of the privatization was in light industries, trading, & tourist services. The government dominated in telecommunications, air traffic, railways, & energy. The IMF is dissatisfied with the rate of privatization & profiteering & is pressuring the regime to step it up which means more land grabs, more opposition, more political prisoners, more economic & political dislocation for working people.

Photo is Obama on recent visit to Vietnam with president Quang. The woman seated on the right is millionaire CEO of Vietjet signing agreement with CEO of Boeing for over $11 billion in commercial jets.