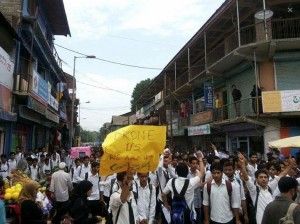 In reviewing my posts (which go back to 2012) about the several year strike by public service workers, teachers, & health workers in Srinagar, Kashmir, I came across this photo from FB friend INn AMm in a post about Palestinian solidarity rallies in 2014.

The protest shown is one of several Palestinian solidarity rallies in Indian-occupied Kashmir during the 2014 Israeli carpet bombing siege of Gaza. There were protests around the world numbering over a million people on every continent, in every country, in major cities & small hamlets. The protests signaled that Palestinians no longer stood alone.

In Kashmir, the struggle against the occupation is now called Intifada as a tribute to Palestinians who also stand unarmed against occupation & colonialism. Because protesters in both Palestine & Kashmir are violently attacked by soldiers, this march expresses solidarity with particular power.