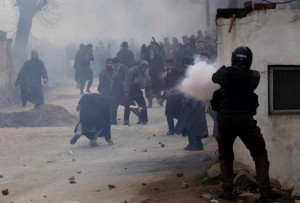 Here an Indian policeman near Srinagar, Kashmir is firing a teargas shell at the funeral cortege of thousands of people for Sajad Ahmed Bhat. Media, not known for its investigative or probative skills, claims Bhat was a local militant & rebel commander killed in a gunfight with Indian military forces. One report says he was probably the longest surviving militant active in Kashmir, having “taken up arms” in 2007. Does that mean he was the last guy standing? What exactly did his militant activities involve? Was he any serious threat to the occupying forces? Why couldn’t they just corner him & arrest him & let due process take its course? Why did they have to take him out in a gun battle? After all, there are 700,000 Indian soldiers in Kashmir & he’s one of the last guys standing.

Media reports claim–& photojournalism backs them up–that Indian police, using a massive assault of teargas, tried to stop the funeral cortege from proceeding up a highway to the graveyard. Now why would they try to stop funeral proceedings even if he was an alleged militant? Were they concerned the cortege would tie up traffic? That they’d have to take down some military checkpoints for the cortege to pass? That surveillance & minesweeping patrols on the highway would be disrupted?

In Kashmir, funerals for those who defied tyranny become political protests–which has always been true in democratic uprisings from Chile to Northern Ireland to Palestine & Bahrain. The solemnity of a funeral does not deter the forces of repression from attack because “wherever two or more are gathered” in the name of democracy & popular rebellion, tyranny is threatened.

Media reported that “clashes erupted” & “protesters attacked government forces with stones” after police came at them with teargas canisters. What did they expect would happen? The Indian forces should be grateful most Kashmiri militants have laid down their arms & now rely primarily on the methods of peaceful massive protest. That’s why Kashmir opposition to Indian rule is called the other Intifada.

Our fullest solidarity with the Kashmiri struggle for self-determination. May Sajad Ahmed Bhat RIP.